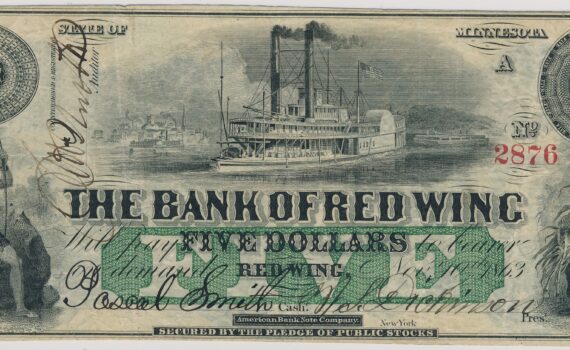 Last year a long-time collector/dealer from the east coast gave me a call to check on the status of a purchase. A week earlier he had ordered a copy of my Minnesota book, not only because he appreciated obsolete notes in general, but he had a couple Minnesota notes he acquired quite a while ago and wanted to learn more about them. I assured him that the book was in the mail and that delivery was imminent.

He went on to tell me more about those notes. He had them for over 25 years, and they were just a couple highlights of his collection. They were from the Bank of Red Wing, one cancelled (as most issued survivors are) and one not. He followed the conversation with a text containing images of the notes. They were quite impressive, but also quite not for sale. Nonetheless, I proceeded to convey my interest in adding them to my collection, and I extended a generous offer. End of conversation.

A couple months into 2020, and things started to get crazy with COVID-19 taking the headlines. I don’t know whether that was a catalyst, but one day at the office I got a text with an offer to sell. It was essentially an acceptance of my offer, with a marginal note added. A deal was done. I mailed the check and received the three notes. It was to be the best addition of 2020.

The $5 Bank of Red Wing was outstanding, a high grade beauty without cancellation. To find a rare Minnesota note of this quality is a miracle. It was an upgrade to a fine note with a cancellation already in my collection, which I could sell to help finance the new purchase.

The $2 Bank of Red Wing was unfortunately cancelled (cut out signature), but it was very special in that it was the first $2 of the second issue (with green overprint and a printed back) to surface. For the first time I was able to fully view the back design of the $2 issue.

Despite 2020 being a freakish year, with all its upsetting events, this is one positive measure of how I will choose to remember it. 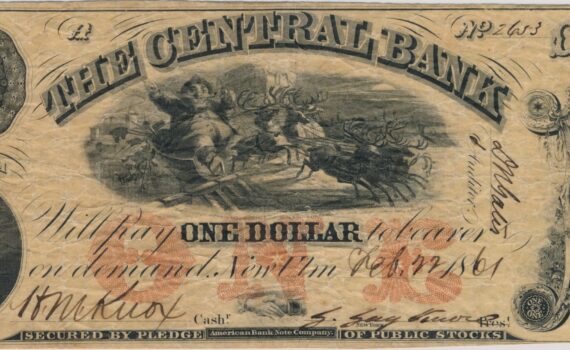 Its been quite a while since my last post. Nearly five years, actually. That is not to say I haven’t been involved in the hobby. Quite to the contrary, my activities therein had a little something to do with my not keeping up with other projects, this website being one of them.

Back in 2017, I was elected to be president of the Society of Paper Money Collectors. I’ve spent my time, with the help of many others, improving the organization with our online presence — an updated website along with some online projects like the Obsoletes Database Project (SPMC membership required) and the Bank Note History Project — and increasing our presence at major shows.

Now that much of the heavy lifting for these projects is behind us, I can spent a little more time on this front. I’d like to highlight some recent monster additions to my collection.

Certainly the favorite pickup was my acquisition in 2016 of the $1 Central Bank of New Ulm — a Santa Claus note with the signature of John Jay Knox. I’ve received a lot of enjoyment out of researching, writing and exhibiting this note. See John Jay Knox in the Bank Note History Wiki for a reprint of my article from the SPMC journal Paper Money, where it received the award for most popular article of the year in the Obsolete Currency category. I’ve also exhibited this note with its story at the International Paper Money Show in Kansas City in 2018 and won Best-in-Show.

Another killer note came out of the blue at the Central States Convention in 2018. While I was returning to the SPMC club table a friend stopped me on the bourse floor and asked what I thought about the note. What note? He led me back to the table to where one of his colleagues had left this rarity. My jaw nearly dropped. This was the note that would complete my collection of issued Minnesota state bank notes, a note that we long thought one day would surface. It came to light in a manor not too differently than I had imagined — in my wildest dreams.

And this little gem came way at the 2018 International Paper Money Show, a heretofore unreported scrip of the Thompson Brothers of Saint Paul, merchant scrip issued by L. Fuller of New Ulm and John W. Young of Saint Peter. Its a thrill see something never before documented in the genre.

There have been many more smaller victories in the last five years. But I like to remind myself as great as these things are, the best part of the hobby is the camaraderie of many like-minded friends. 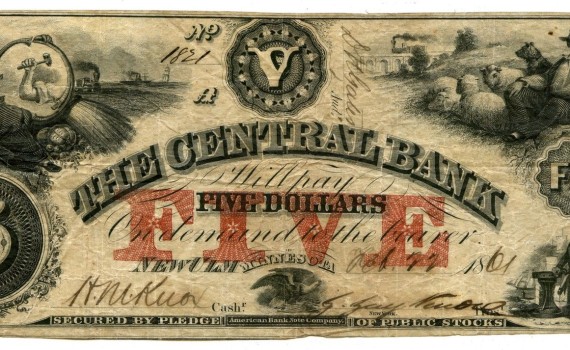 This landed in the mail today — and has rapidly become one of my favorite Minnesota bank notes.

What makes this one special is that is signed by J. Jay Knox as president.  Collectors of national bank notes will recognize him as the man depicted on Series 1902 $100 notes.  Here is the story of John Jay Knox.

Knox (1828-1892) grew up in Oneida County, New York in the 1830s and 1840s.  He was the namesake of his father, who was a successful merchant and banker.  Knox earned a degree at Hamilton College in 1849 and worked at his father’s bank in Vernon, New York.  In the late 1850s he and his younger brother Henry moved to St. Paul, Minnesota to take advantage of the opportunities available on the western frontier.  With his father’s assistance, they established J. Jay Knox and Co., and became a prominent banking house in the city.

Knox learned first hand about the wild west nature of banking in Minnesota Territory.  The territorial government banned the issue of bank notes, but creative bankers were easily able to circumvent the laws simply by endorsing the notes of otherwise worthless out of state banks.  They hand-wrote an endorsement clause on the notes, signed them, and they became money.  Knox was among the bankers to issue endorsed notes.

When statehood was achieved in 1858, among the first laws of the state legislature was an act to enable free banking in the state, with the privilege to issue currency.  Notes were to be backed by the new Minnesota 7s, which were obligations of newly formed railroad companies.  The bonds were thinly traded and did not have a ready market, yet they were accepted at 95% of face value as note security.  Almost as soon as bank notes backed by these bonds were issued, they were heavily discounted in trade.

Among the new banks was The Central Bank of New Ulm, a town located about 100 miles from St. Paul.  The Knox brothers purchased the bank from its organizers a few months after the bank opened.  While the notes were floated in St. Paul, it is apparent that the remote location was deliberately chosen so as to reduce the likelihood that notes would be presented at the New Ulm office for redemption.

In February 1862 Knox wrote an essay that appeared in the Merchant Magazine and Commercial Review, a widely read trade publication, that supported Treasury Secretary Salmon Chase’s vision of a national banking system.  The article was noticed by Chase, who made Knox an offer to serve in the Treasury Department as a disbursing clerk.  Knox accepted the position in 1863.

Knox’s years of service was rewarded by being appointed Comptroller of the Currency, the top official who oversaw the regulation of national banks throughout the country, in 1872.  He held this position until 1884, when he returned to the private sector.

The irony in all this is that Knox owned and operated the sort of bank that he decried in his writings in support of national banking.  The Central Bank of New Ulm closed in 1862; its notes were presented for redemption, but Knox refused payment, and the state forced the bank into liquidation.  The state auditor sold the bonds for a deep discount, leaving only enough hard money to pay bill holders 30 cents on the dollar for Central Bank notes.

This weekend at the MOON coin show in Brooklyn Center I acquired two rare proofs on Stearns County Bank of St. Cloud from collector/dealer Dave Steckling of St. Cloud. He purchased these from the Schingoethe Collection at auction back in 2005 and 2006.  That was a busy time for me as well, having to pick and choose what I could afford in those landmark sales.  Dave very much enjoyed owning these notes, and was glad to see them go to a good home.

In my opinion the $2 is the best note of the series, having four vignettes with a magnificent central vignette.  If you look carefully at the right side, you can Indians sneaking into the door of the pilgrim family’s house.

I had acquired the $1 note of this bank about two months ago — they had all been on my wish list for a long time.

Minnesota Nice is a sampling of Shawn Hewitt’s collections of antique paper money from Minnesota locations.  The collection of obsolete notes is the “nicest” of its kind ever assembled — most notes are finest known or unique.  Enjoy these graphical treasures from Minnesota’s past.

See some of my favorite notes and read about the stories behind them.